If you think that since the disappointment of Pirates of the Caribbean IV: On Stranger Tides (2011) the image of the pirate-as-hero in popular culture has received a setback, think again. As I walk through my home town the billboards are once again filled with a pirate flag. 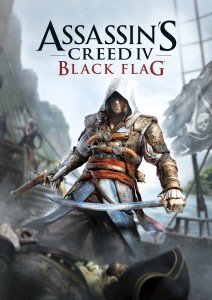 The pirate as freedom fighter against state authority (or to be more precise, colonial empires) is back again in the video game series Assassin’s Creed.  Black Flag is the latest installment in the series, and focuses on the adventures of a pirate-captain-cum-assassin in the 1715 Caribbean: the Golden Age of Piracy. There are a number of trailers for Black Flag on the Internet, but there is one that makes the clearest statement about the politics of piracy as presented in Black Flag. The pirate as fighter against colonial imperialism, the republic of pirates ruled by the outlaws themselves on the island of Nassau in the Bahamas, the pirate philosophy of enjoying life while it lasts, it’s all there. As is some women’s lib, as presented in the character of Anne Bonney. As Anne says in  the trailer to the hero: ‘You taught me how to live in liberty and die defiant.’

The message is of course simple and uncomplicated, but what do you expect from a video game? At least it is still a relevant message in these dark times when Anne says: ‘Kings and queens curse your name, but you defy them by living free.’ 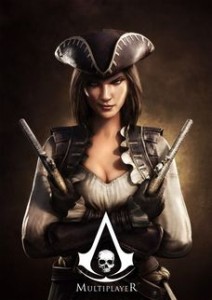 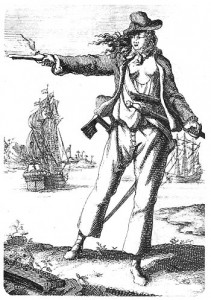 The Anne Bonney from Black Flag (on the left) is of course modeled on the historical woman pirate Anne Bonney (on the right, in an early eighteenth-century drawing). The pirate-hero of Black Flag aside we encounter a lot of historical figures, including the Blackbeard who also figured in On Stranger Tides. The reference to a Republic of Pirates suggests that the makers of Black Flag have taken good notice of a historical study of the same name, written by Colin Woodard and published in 2007. The idea of an autonomous pirate republic is in itself nothing new. It goes back as far as Daniel Defoe and Captain Johnson, contemporaries of the Golden Age of Piracy. The idea of the pirate as social bandit (see my earlier post on The Noble Robber) has been taken up and further developed by American maritime historian Marcus Rediker. It has even led to a minor historical controversy, as a number of maritime historians feel that it is based on an ill-advised romanticism – though these historians seem to forget that authors as Rediker and others do not hesitate to address the shadowside of piracy as well. My own study The Devil’s Anarchy, which discussed two accounts of seventeenth-century Dutch pirates and tried to establish similarities and dissimilarities with the Golden Age of Piracy, was confronted with similar criticism. Luckily this will not hinder the publisher to bring the book back into print in the near future. 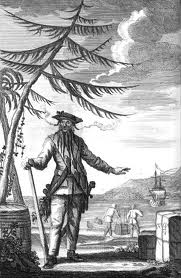 Undaunted, Woodard put himself explicitly in the Rediker tradition and did a more extensive study of archival sources for his Republic of Pirates. This seems not only to have had some influence in the world of video games. Coming soon in a television program Crossbones, hosted by American corporation NBC is, again, Blackbeard. On the left his early eighteenth-century presentation; his new persona will be performed by no one less than John Malkovich. If we may believe Wikipedia Crossbones is once again inspired by the Woodard book.

We’ll have to wait to see what will come out of this but for the time being the black flag of piracy is still hoisted from our game computers and television screens.