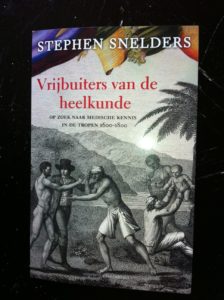 In this chapter the ‘adventurer-scientist’ is introduced. The chapter starts with German natural scientist Georg Marcgraf, finding himself in 1638 among the ‘cannibalistic’ Tapuya Indians of Brazil. At the siege of Portuguese-held Bahia the Dutch soldiers are plagued by diarrhea and dysenteria. Marcgraf discovers treatment methods among the Brazil Indians.

In the 17th and 18th centuries the European newcomers to the tropics had to deal with the disease-environment and had to find ways of survival: methods of prevention, hygiene and treatment. Finding this knowledge needed a special kind of researcher: the adventurer-scientist with a freebooter spirit. The adventurers were a very diverse group, but they shared some common characteristics. To start with they had a capacity for accurate and detailed empirical observations and for description of these observations. They were part of a network for the dissemination of information. Their activities had important practical and pragmatic components stimulating trade, expansion, and even privateering and piracy. An adventurer-scientist was able to open-mindedly create and sustain contacts with indigenous and to him strange cultures. He possessed personal characteristics such as perseverance, a healthy constitution, and ruthlessness, and he could operate in a violent environment. And he was able to operate autonomously. In fact, when substituting the words ‘searching for knowledge’ with ‘searching for Spanish treasure’, the characteristics do not change much.

The adventurer-scientists encountered a world in which the disease-environment was radically changing: the world of the ‘Columbian exchange’ of diseases and the spread of new health problems from Africa as a consequence of the slave trade. The next chapters will investigate their adventurers and significance in the world of the tropical Dutch Atlantic: West Africa, Brazil and the Caribbean.

A MOTHER OF PUTREFACTION’ – CONFRONTING THE TROPICAL CLIMATE

Here the health problems of the Europeans in the tropics are discussed. At first sight the tropics, in West Africa or the Caribbean, look like paradise. But soon the snakes are discovered: the murderous heat, the unhealthy air, ‘hot fevers’, the ‘flux’ (diarrhea) and bloody flux (dysenteria), scurvy, sexually transmitted diseases because of intercourse with black women, parasites, worms and insects. Description of the African Gold Coast as the ‘white man’s grave.’ Health problems affected most in particular common soldiers and servants because of their housing conditions and mal-nutritious diet.

This chapter introduces the doctors, surgeons and barbers who went on voyages and overseas to the tropics. It discusses their social origins, their (lack of) training and qualifications and the development of textbooks based on experiences overseas. The level of competence of the surgeons fluctuated widely and there was sometimes considerable mistrust towards them. The case is discussed of a surgeon in the Dutch navy: he was executed after having confessed to a pact with the Devil and to the murder of his patients.

In this chapter problems of health and disease are pictured from the perspective of the European adventurers: how did they experience their problems? Early modern medical thought and practices are evaluated as a kind of common sense medicine, centered not on pathogens and specific diseases but on disturbance of balance and with a strong holistic emphasis, placing the individual in an environmental context. In this framework, health problems are specific to certain regions and if there are health problems in a region, there are bound to be solutions there as well: specific prevention and treatment methods. Operating in this framework stimulated an open-minded view of health practices of other nations and cultures.

The first way to obtain medical knowledge in the tropics was a ‘piracy of knowledge’: this included a literal spying on practices of the enemies of the Dutch, the Spanish and the Portuguese. Dutch merchants at the end of the 16th century, working in the service of the Spanish and the Portuguese, returned to the Dutch Republic with knowledge on islands and inlet harbors in the Atlantic and the Pacific, There fresh supplies could be obtained, including lemons and oranges against scurvy, and patients could be rested and recover.

ADVENTURERS AND INDIANS IN BRAZIL

Between 1630 and 1654 the Dutch occupied the Portuguese colonies in Northeast Brazil and fought a protracted guerrilla war against their enemies. They found allies among the Brazil Indians, especially the sedentary Tupi and the nomadic Tapuya. In particular the Tapuya proved to be fierce warriors. But the Dutch were ambiguous about their allies. On the one hand, the Tapuya were seen as living in an anarchist and egalitarian paradise, without trade, government, and property. On the other hand, they were seen as lazy, cruel, and as followers of the Devil.

From a medical point of view the Indians were considered to be superbly adapted to the tropical environment. Being close to nature, they learned about the medicinal properties of plants from animals. It was thought therefore that the Dutch could learn about these properties and about suitable medical practices from the Indians. A few adventurers like Georg Marcgaf and the poet, soldier and treasure-hunter Elias Herckmans went on expeditions into the interior and learned from the Indians. The German Jacob Rabe went further: he took a Tapuya wife, lived among the Indians, and joined them in attacks on Portuguese settlers. He was finally murdered on instigation of a Dutch officer who disliked his close association with the Tapuya.

The knowledge obtained by the adventurers in the Brazil contact zone with the Indians found its way into medical practice and treatises, as is testified by he Historia naturalis Barsiliae (Natural History of Brazil, 1648), celebrated as the first text book on tropical medicine.

ILLNESS AND DEATH ON THE SLAVE SHIPS

The slave trade profoundly affected the social, political and biological environment of the Caribbean. Between 1660 and the Napoleonic era Dutch trading companies were key players in the slave trade with West Africa. Centered on the slave markets on the Caribbean islands of Curacao and Saint Eustatius, and the markets and plantations of Suriname and Guiana on the South American continent (the ‘Wild Coast’), Dutch traders shipped almost 300,000 slaves to the Americas. This chapter discusses illness and health on board of the slave ships, and the development of medical care. Because of commercial, not humanitarian reasons the companies wished to bring the slaves as healthy as possible across the Atlantic. ‘Healthy’ is of course a very relative notion here: a death percentage of 15% was considered acceptable. Ironically, in order to stay below this percentage use of the medical knowledge obtained in the tropics and partly gotten from the Africans themselves was crucial. The implementation of this knowledge on the ships is discussed. A key figure in this chapter is the Swiss surgeon David Henry Gallandat, who went to West Africa on Dutch slavers in the 1750s. Gallandat was very keen on learning medical knowledge from the Africans themselves, visiting African cities and conversing with the African doctors. But he used the information in his tract on medical care on the slave ships.

SURGEONS IN THE CARIBBEAN

At the same time, navy surgeons as Abraham Titsingh and Anton Schlapprizzi learned about prevention and treatment in the Dutch Caribbean. Titsingh learned from local inhabitants on Curacao and resented, as a ‘freeborn surgeon from Amsterdam’, the pretensions of academic doctors. Medicine to him was a matter of practice, not theory. Schlapprizi put this into effect when devising methods to deal with a new disease: the so-called ‘chocolate’ or ‘black flux’ (yellow fever) that plagued the crews on his ships.

MEDICAL KNOWLEDGE BETWEEN BLACKS AND WHITES

The plantation economy of Suriname, in which the overwhelming majority of the population consisted of African slaves, became a ground of exchange of medical information between blacks, whites, and Indians. New diseases were brought to Suriname: not only epidemics of yellow fever and so forth, but also an increase in the prevalence of skin diseases such as leprosy and yaws. African healers were important in the treatment of slaves, but many whites sought as well solace with black herbalists and even sorcerers. Slaves were however reluctant to share their knowledge with white doctors and slave-masters. A few Europeans succeeded in creating bonds and exchanging knowledge with blacks: the naturalist and illustrator Maria Sybilla Merian, being a woman, succeeded in obtaining knowledge from her female slaves on plants, medicine, and abortifacients. The Scottish-Dutch mercenary John Gabriel Stedman when fighting the Maroons kept his health because of the information received of his black servant and of his black girl friends. One surgeon, Johan Carel Mangemeister, joined the Maroons and was executed after his capture by Dutch troops.

THE WHITE ADVENTURER AND THE BLACK SORCERER

Sometimes local medicine made it into the pharmacopeia of European medicine and became an export product to Europe. This chapter details the career of quassiebita, a medicinal bark still used in Surinamese folk medicine. Already well known by the Indians of Guiana, information of the bark was given by the notorious African sorcerer Quassie to the Swedish adventurer Carl Dahlberg. Dahlberg successfully marketed the drug in Europe with the assistance of the famous Swedish botanist Linnaeus. Both Quassie and Dahlberg were figures on the fringe of their societies. Quassie was a feared sorcerer, a freed slave, and actually a collaborator of the Dutch in their war against the Maroons. Dahlberg was a typical adventurer, arriving penniless as a mercenary in Suriname and making his fortune there. It was the contact between fringes that made global circulation of knowledge possible.

CONCLUSION: ADVENTURERS AND CIRCULATION OF KNOWLEDGE

In his book Against Method philosopher of science Paul Feyerabend based himself on the history of science to conclude that science does not progress through fixed methods. On the contrary, the history of science shows a kind of ‘anything goes’: what works in a given situation, works, and afterwards people will theorize about the why and how. Against the pretensions and power aspirations of so-called rationalists who extolled strict scientific methods, Feyerabend sketched an ‘anarchist’ or ‘dadaist’ theory of knowledge and advocated a complimentarity of methods.

The history of the 17th– and 18th-century ‘adventurer-scientists’ is an example of this kind of ‘anything goes’. Their search for knowledge was not theory-driven, but pragmatic and opportunistic. Pre-modern medicine with its flexibility of concepts and its emphasis on the local nature of knowledge and practices proved to provide a fruitful framework for this search. The Dutch Atlantic gave the social and political environment in which ‘adventurer-scientists’ could thrive, analogous to the buccaneers and freebooters of that period. As the buccaneers were ultimately used by the European powers to fight off the Spanish, the adventurer-scientists were ultimately used by the European powers to fight off disease and death. Without the ability of the adventurers to operate in hostile environments and contact other cultures, medicine in the tropics could not have developed.